Agincards is a reference to Agincourt, a french town not unlike Carcassonne, and is intended to indicate that this game is related to Carcassonne but playable with a pack of cards.

The game can spread itself out so please give yourself a lot of space.

Agincards is designed to not need any strange parts and most people should be able to round up these modest materials.

The following are the basic game rules for single play.

Multiple players take turns and keep track of separate scores. The game play remains exactly the same as single play but you may want to use more than one pack of cards for games with many players.

Shuffle the pack of cards.

Deal five cards to your hand and also take your initial five tokens.

Place the rest of the pack face down, this is the draw pile.

Draw one card from this pile and place it in the middle of the table, this is the seed card of the map.

Set your initial score to 0, this is a running total.

As you score in the game, this number will go up so keep track of it as you would in a game like scrabble.

Play one card from your hand onto the map, or pass if you wish.

If you now have less than five cards in your hand, take one card from the draw pile into your hand and begin to plot your next move.

Please note that you must play a card first and then draw a card, not the other way around.

When there are no more cards in the draw pile, play what is left from your hand without drawing any new cards.

The game is over when no player wishes to play any more cards.

Usually this is because they have run out of cards but play may end at any time if a consensus to stop is reached.

The map is where cards and tokens are placed.

Whenever you play a card by placing it on the map, you also have the option of placing a single token on top of it.

This is the only time you may play a token.
And you may only play one token at a time.

Thus, only one token can occupy a card at any time and only during your turn and placement can you play it.

This will instantly score you points and probably more whilst it remains on the map.

You only have a limited number of tokens so it may be some time before you can remove that token from the map.

Each card represents a number and a color, red or black. The suits are ignored.

You can only place a card next to another card already on the map, either to the left/right or top/bottom.

You may not place any card next to another card of the same value.
All touching cards must be different.

When two cards are placed horizontally or vertically to each other, they begin to form a run.

Any two different cards can be placed next to each other but to have three or more, you must observe the direction of the run.

A run is a numerical series of cards that goes higher in one direction and lower in the other.

You can never break this placement rule, all runs of cards must ascend in one direction and descend in the opposite.

When you place an Ace or a King, you end the run in one direction as no card can be higher than a King or lower than an Ace.

This causes a dead space to exist as no card can possibly be placed in either direction.

Another way to create a dead space is when two runs intersect and no card can be placed that would satisfy the conditions of both runs.

For example, less than 6 but more than 8.

These dead spaces are important as they can help you reclaim previously placed tokens.

Placing a card to an existing run:

For example, the player with the yellow token has scored 1 after they placed the 5 card next to the 4.

If that same player had another token on the card next to it, they would have scored 2 instead of 1.

Placing a token on an existing run:

The score is the length of the run; ie. 1 point for a single card, 2 points for two cards and so on and is awarded to the owner of the token.

For example, the player with the blue token has placed a token on a new card they placed. This has earned them 3 points.

Multiple tokens from multiple players may score for the same score run.

When a run is exhausted, any tokens placed on it can no longer score any more. This is when you can reclaim those tokens.

You can reclaim as many or as little tokens as long as you are able to prove that the run has been exhausted.

For example, the score run in both directions cannot be continued either because a card of the opposite color has been placed ending the score run or a dead space is preventing any further cards from being placed.

It is up to the player who owns the token to spot and reclaim them when these conditions are met.

You may not argue that the cards needed to continue scoring are no longer available in what is left of the pack.

For example, saying that there are no Aces left so you cannot play a card less than 2.

Only a dead space or a change of color can end a score run.

When the game ends you will have a score and a pretty map of cards.

In single play, the objective is to score as high as you can (or trying to beat the pack, see below for alt game).

When playing with two or more people, the highest score wins you the bragging rights of a weaner.

You can adjust the number of tokens each player has to balance the game.

For example, a strong player gets 4 tokens and a new player could be given 6. 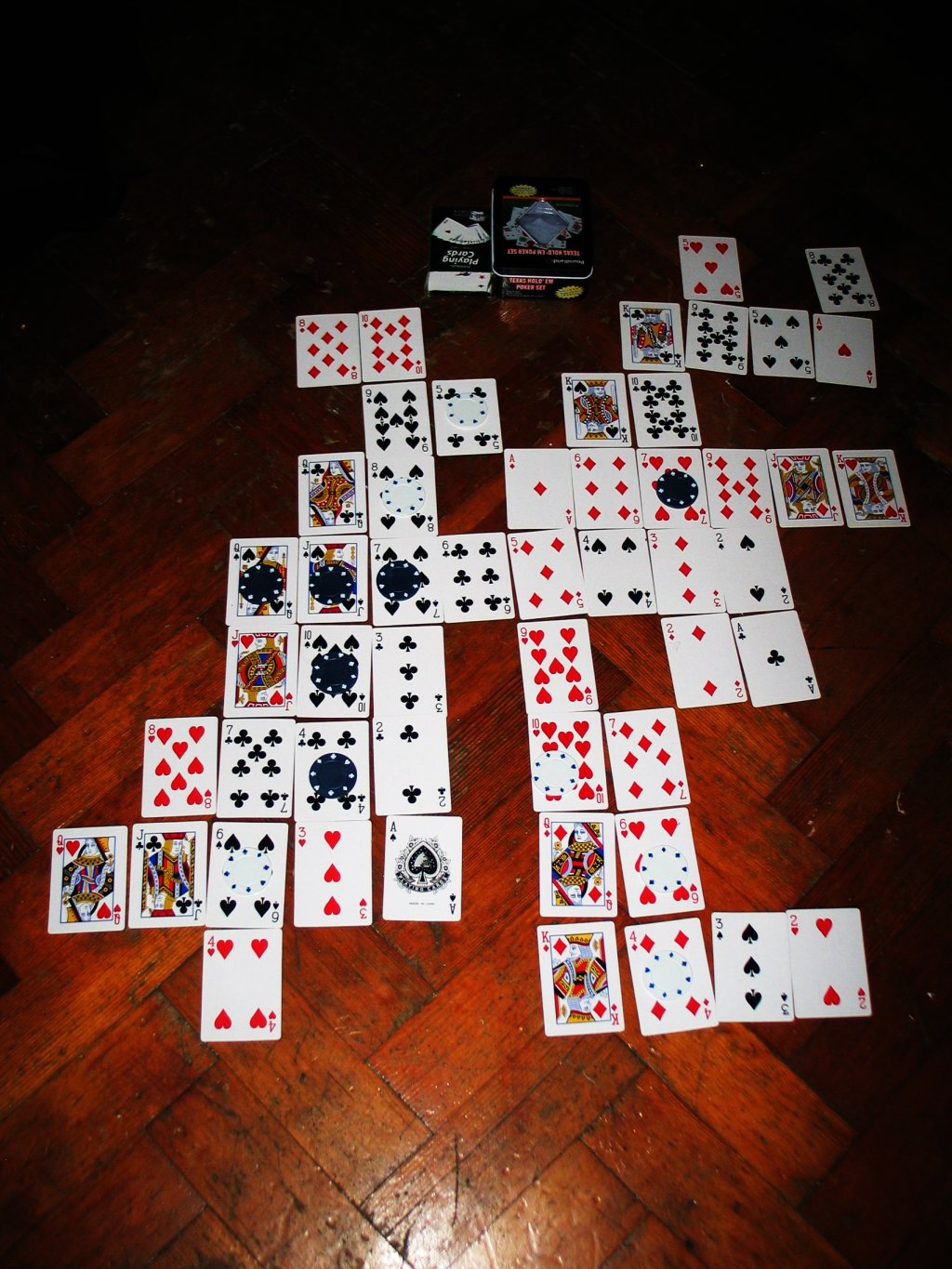 Because it is preferable to play patience games with a simple win/lose outcome, here is how to do the same with AginCards.

Every card played must score at least 1 point.
If you cannot play a card, you lose.
If you play all the cards, you win.

As long as you have tokens, you can always play a card and place a token on it. Otherwise, you must continue scoring runs.

This means you must place a token on the first card you play (not the initial seed card).

Most of the strategy comes from planning to reclaim tokens.

The difficulty can be adjusted by changing the number of tokens you have.
If you keep losing with 5 tokens, try playing with 6 and so on.

I suspect it may not be possible to win with only one token, no matter how lucky you are.